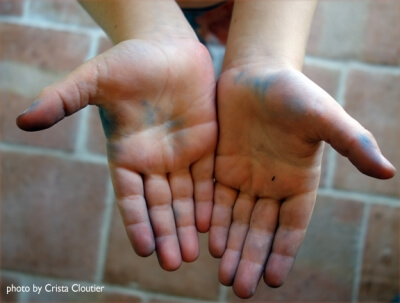 Like so many artists, I was working hard. Submitting, proposing, applying. But it seemed nothing was going my way and I was totally stressed.

I phoned my Guardian Angel. It all spilled out. I’d worked so hard, stated my intentions to the universe and put in the effort. Yet when I looked at the results, nothing had gone the way I’d wanted.

The universe had not given me what I requested within the timeline I set.

And my Guardian Angel said one word that changed everything, “Allow.”

“Stop bossing the universe around! Stop dictating your terms! Instead, state your intention, do the work, follow the path, and bless the journey. Walk in faith that the universe has its own timeline and agenda, and it’s far greater than what you can ever imagine.”

In that moment, I could clearly see all aspects of my life: in my career, relationships, and even my creative work… I was not allowing.

And something inside shifted. I let go of my need for control of the outcome.

As artists, we often feel we have to try harder than everyone else. It doesn’t help that our very work puts our vulnerabilities on display for all to see.

But what happens if you stop trying so hard? Stop pushing your agenda on the universe?

What happens if you simply do the work and do it joyfully?

My Guardian Angel explained, “Stress is a signal that your ego’s in charge. Doubts push success away. You’ve gotta learn to love yourself on a higher level. Staying focused and intentional is different than obsessing, it’s different than stress.”

Allow. That one word rocked my world.

And today, it’s my mantra.

But what about you?

Maybe you’ve also had an exhibition of your work with high expectations of sales and critical acclaim? And when those expectations weren’t met, you used the experience to turn against yourself. You used words like failure, disappointment, not good enough.

We’ve all been there.

But I’ve also witnessed what’s on the other side.

Someone sees the show and remembers it. They tell a friend who works as a curator and a few years later, those pieces are going to a museum. It’s a good thing they didn’t sell because now their value has greatly increased.

The point is you never know what door is going to open. Allow the universe the space to do its magic. Don’t curse what may well turn out to be a blessing.

And when it all gets too much, when life has you against the ropes and you can’t stop the tears, do what I do: call an Angel.

Want to learn how to sell art online? Join my list today and I’ll send you free resources.