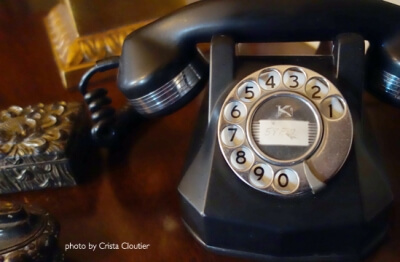 What does it mean to have a ‘calling’ as an artist?

Who’s calling you? What exactly are you being called to do?

Artists aren’t the only ones who feel called. When a person dedicates their career to religion, to God, we say they have a ‘calling.’

And it expands beyond the spiritual. Doctors have callings. Teachers too.

Anyone who works with a sense of fulfilling a destiny or purpose can be said to have a calling.

In other words, a calling is something outside of ourselves that speaks to something within. It’s an impulse, an urge, an invisible sense of direction.

I’ve met artists who haven’t felt called, but who see the path of an artist as a way to feed their ego and bank account. And to them I say, “Good luck with that.”

Because the artist’s path is not easy.

As an artist you need to have that inner compulsion, that drive, to carry you past the many challenges and hurdles that this life brings.

Perhaps that’s why so many artists suffer years of confusion before finding the courage to answer the call?

One can’t blame us because our culture itself doesn’t value creativity. We place art in a tiny box and dismiss it as irrelevant compared to ‘real’ vocations.

Sure, it’s easy to answer the call to be a doctor. Think of how proud your mother will be! Think of the big paychecks!

How about the call to go into politics as a public servant? You’ll have influence, power and fame!

But the call to be an artist?

It’s usually responded to with a sigh and a shake of the head.

You’d better find something to fall back on.

No wonder it often takes us so long to heed the call. The call to be an artist is so outside of the expected norms of our society that we often don’t even understand what’s being asked of us.

We spend years lost in confusion. We want to do something. Something big. Something important.

We don’t know exactly what it is, but we do know that we want to make.

You’re being called to make art. You are an artist. This is your calling.