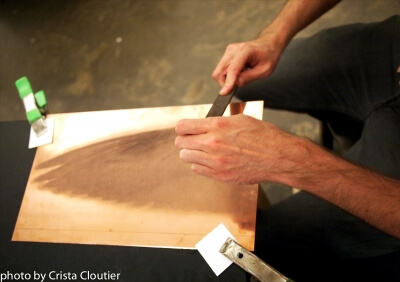 There are several definitions of artists that I personally subscribe to, but my favorite is this: artists are alchemists.

During the Middle Ages, an alchemist was known as someone who could transform base metals into gold.

I believe that as artists, we turn everything into gold.

Through an artist’s touch, a blank canvas is transformed into a work of expression and beauty. A dilapidated neighborhood wall becomes a visual message of hope and community. A lump of clay becomes imbued with meaning.

Everything we touch turns to gold.

And our work doesn’t end in the studio.

For it requires faith to be an artist.

Yes, for an artist is an alchemist — remember?

And everything you touch turns to gold. Even failure.

This is a mantra worth repeating. Try it now:

Everything I touch turns to gold.

A few years ago, I attended the Scottsdale Arts Festival with a film crew in tow. I wanted to interview artists for a new workshop that I was creating — The Working Artist’s Art Fair Essentials.

But when we arrived at the festival, I realized that I’d chosen the wrong day to shoot! The artists were setting up their tents, not their displays. They wore work gear and were focused on the tasks at hand. No one wanted to be interviewed.

It was a disaster. I had to re-book my film crew to return again the next day.

I was terrified that my new workshop was failing before it ever began.

I desperately chanted The Artist’s Mantra, trying to convince myself as time and resources spiraled out of control.

And in spite of the trouble, the time and the expense, shooting the next day actually did work out better.

We knew when the light would be best. The artists looked great and confident on camera.  I myself had gotten a proper night’s sleep and was able to relax and have fun.

So remember The Artist’s Mantra. And know that even if something goes all wrong, it will be alright.