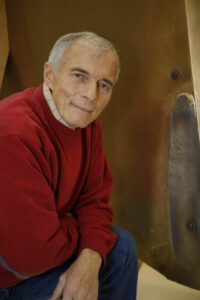 However Wayne’s journey to becoming a sculptor, from turning his craft into art, took over 40 years and it’s not been an easy path.

Having focused, for the majority of those 40 years, on commissioned work, moving to non-commissioned work and creating fine art sculpture posed a lot of questions about whether his work was good enough. Like so many artists, Wayne found it intimidating to make himself vulnerable to others’ opinions. Yet he knew deep inside that he simply had to make the jump.

And he jumped! Wayne’s very first show will be a solo show this year and it will mark the first time that his work will be publically displayed.

A few years ago, Wayne was interviewed by Luxe magazine. The question was posed whether Wayne considered himself an artist and he replied that he “designs and builds things.” Wayne held the common mind-set that it wasn’t up to him to determine whether his work was art or not.

But Wayne admits that today, his answer would be different. Because it was through taking The Working Artist Masterclass that he realized that he is an artist, a sculptor in his own right.

Wayne says it was a comment that Crista made during a Creative Career Consultation that became a pivotal moment in his art career, and was ultimately life changing. Crista said, “Wayne you’re not an emerging artist, you’re a mid-career artist who has changed direction.”

From that moment, Wayne’s whole perspective changed.  Realizing that Crista had the experience and credentials to say those words, he had the validation he needed to get his work out there.

Crista also helped him to identify who his clients are and to write an artist statement, which had to be distilled from 25 pages to one!

One year later, and Wayne says The Working Artist continues to serve as a valuable support network to him. Although there are many artist advisors and classes out there, it was Crista’s personal story and background that really resonated with him.

Wayne explains that everyone who takes the class has a story and his advice to other artists would be to be true to your own story, to realize what it is and how it’s shaped and formed the work that you do.  Yes, Wayne wishes he would have been creating the work twenty years ago that he is now doing, but as he says, “I wasn’t old enough.  It has taken that time to complete the narrative of Wayne Brungard Sculptor.”

While there is still a part of Wayne who “designs and builds things”, he is relieved to have finally come to the point where he is comfortable being a sculptor.

One of the most important lessons he has learned is to find people with whom your art resonates. He realizes his work won’t connect with everyone in the art community, and coming to terms with this is the most important part of working as an artist.

To see Wayne’s work, check out his cool website at http://waynebrungard.com/

Join my list, it’s FREE! You’ll learn how to approach to art-world decision makers, create new revenue streams, and get paid more by being who you are – an artist.