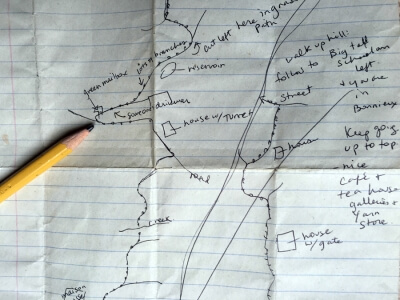 Maria was teaching at a small art school for American students in a tiny Provençal village. I was there for the summer too. We both had a profound experience at that school, deeply exploring our creativity. It was really quite special.

Maria was a hiker. She’d take long walks down the mountain where our village was perched, across the long valley and climb up a neighboring mountain to the other village. They had really good almond croissants in that other village, and I was jealous of Maria’s independence.

I wanted to venture out beyond the confines of our small village too, but I was afraid of getting lost.

So Maria drew me a map. This map pictured here, as it turns out.

I’d try to follow it faithfully; down the old Roman road, through the oak grove, over the creek, past the vineyards and the grand house with the turrets…

But I always got lost at the same place. Where the pencil points in the picture is where I’d always find myself going in circles, unable to pick up the trail.

Each time I made it this far I’d have to return home, unsuccessful once again. Almond croissant-less.

Over the years, I’d return to the village for a week’s vacation here and there, whenever time and money allowed. I love this place. It’s full of artists and history and the air itself is thick with inspiration. I breathe it in.

And each time I’ve visited, I pack this old piece of paper that Maria drew for me and try to pick up the trail again.

But I never could. The trail split in so many different directions, I couldn’t find the right one. I always got lost.

When, 8 years ago now, I experienced my “mid-life correction,” it was to that tiny French village of artists that I ran. My intuition said that this was the place that held the answers for me.

When I first arrived, I cried. All the time. I couldn’t believe I’d left my career, my family and friends, sold my belongings to come to a place so remote. So foreign.

I was afraid I’d made a huge mistake. Afraid of the loneliness that was threatening to engulf me. Afraid I was lost.

And then one day, I followed the signs for an exhibition at the art school. And across the room I saw her, Maria Lee.

She too had followed a voice that urged her to return to the village of inspiration.

It had been 13 years since we’d been there together, yet we were both there again. We’d arrived within a week of each other. Our houses were so close that we were neighbors. And I was lonely no more.

The first thing I did was to pull out this old map that Maria had drawn for me all those years ago. “Take me!” I told her. “Show me the path to the other village. I want one of those almond croissants.”

That was 8 years ago. And we spent a wonderful season together, hiking the trails as we chased inspiration and carbohydrates.

I haven’t seen Maria since then. But two months ago, she happened to be coming through Phoenix while I was there. So we met for lunch.

I was at another crossroad in my life. Things were changing. I wasn’t sure which way to go? I was lost and it was scary.

Have you ever felt that way?

I weepily confessed to Maria that I wished I could return to our village once more. I needed to connect on a deeper level with my creativity, with my self. But I didn’t have the means, it just didn’t seem possible.

The next day, Maria received an email from a friend who lives outside our Provençal village in the valley. He’d had to leave France and needed someone to live in his house and look after it. Did she know anyone who could come to France right away?

Now I’m living in a rustic 500 year-old stone cottage in the French countryside. It’s given me refuge, clarity, a beautiful place to connect with my work, and a hearty dose of creative inspiration.

This house has given me everything I need. Thanks to a beautifully talented artist named Maria.

I don’t know why I still have this old map? I most certainly know the way to the almond croissants by now. But for some reason I’ve held on to this folded scrap of paper.

And looking at the map now, I realize that this old stone farmhouse is situated at exactly the point where I got lost all those years. Where the trails forked and I couldn’t find the way.

But now, thanks to an artist named Maria, I know exactly where I am.

Because getting lost is part of finding your way.

Let me lead you on the path to transforming your art practice. Start by joining my mailing list today!