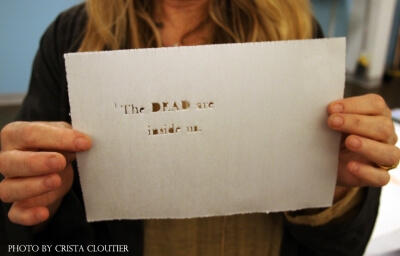 Every family has a story.

They called her “Grandma Ach” because of her habit of beginning each sentence with a guttural sound of disapproval. “Ach! What is this?”

But her name was Mary Anne.

She was the daughter of German immigrants. Farmers. But Mary Anne was an artist.

Bright, beautiful, and serious, the photos of my great-grandmother remind me of a young Georgia O’Keeffe.

And like Georgia O’Keeffe, Mary Anne was devoted to painting. This is what she wanted to do with her life.

One day a man from a neighboring farm named Adam came to call. He was looking for a wife. His own wife, his beloved Elizabeth, had passed away and Adam needed a woman to raise his three kids and run the farm.

The daughters were called out and Mary Anne, being the most beautiful, was chosen.

Mary Anne would live in Elizabeth’s house, next door to Elizabeth’s parents. She raised Elizabeth’s children and each night she lay with a man who continued to mourn Elizabeth.

Over the years, she would give Adam 10 more children. Including my Grandfather.

I don’t know if there was a time that she ever liked kids. My Mom remembers Grandma Ach as hard and disinterested. I remember her too, with her long dark hair and piercing eyes. She fascinated me.

It wasn’t until she was already an old woman that she finally got all of the children out of the house and on their own paths. And the moment the last one left, Mary Anne marched to the store to buy herself canvas and paint.

She was an artist.

But then life played its cruelest joke of all. It took away her sight.

Grandma Ach would live a long life, but not a happy one. Because she was never allowed to do the work she felt most called to do.

I look at the choices we have the privilege of making today; about how to spend our time, how to live our lives, what is worth fighting for and who we want to be. We forget how lucky we really are to have such freedom.

So when an artist now whines to me that he wants to make art but just can’t get into the studio, making one excuse or another, or she’s thinking of quitting the art business because it’s just too hard, I tell them “That’s your choice.”

History is full of too many stories like Mary Anne’s, of artists who literally had no opportunity to do what their soul demanded.

“Can’t they see?” I ask myself, as I think of my great-grandmother’s fruitless struggle to be her true self, “Who is really blind?”