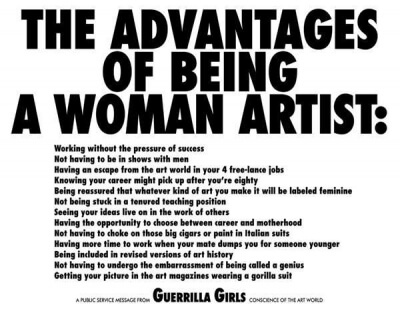 I was speaking to a group of university students. As I finished, a young woman approached the stage.

“May I ask you a question?”

Of course! I asked if she was an artist. I inquired about her work and her practice.

“But the question I have isn’t about me. It’s about my boyfriend. He’s an artist too. We’ve decided to promote his career first and then once he can support us, we’ll focus on mine.”

She then proceeded to ask me questions about how to best market his work. And I just wanted to put my arms around her and weep.

Because this isn’t the first time I’ve heard this story.

Listen, it’s not just girls. We’ve all been there. In one way or another, we’ve all given our power away. Made someone or something more important than our work, forgetting that our work isn’t just what we do – it’s who we are.

But women are the most guilty culprits. And we simply must stop doing this to ourselves.

Furthermore, we’ve got to stop accepting it in our culture.

Now I’m going to talk about gender and you’re going to roll your eyes. But bear with me for a minute, because this affects all of us.

I believe that one of the biggest reasons that art is important is because it represents the culture it lives in.

Think about it. Art is how we say “I was here” both as individuals and as a society.

Throughout my career, I’ve found that there are more females in the art school classrooms than males. And that number just seems to be growing.

But that number is not represented in the galleries, museums, and collections. It’s considerably more difficult for a woman to succeed in the art world than a man. (And don’t even get me started on the difficulties faced by artists of color!)

Today, the exhibition history of our most important institutions is shameful.

Don’t believe me? Look at these numbers.

Of all the solo exhibitions at Paris’ Centre Pompidou since 2007, only 16% went to women. In the UK, the Hayward Gallery boasted only 22% of solo exhibitions dedicated to female artists over the past 7 years. Tate Modern has granted women artists solo exhibitions only 25% of the time. And last year’s Venice Biennale came in at 33%.

That young artist who was willing to subjugate her voice for that of her boyfriend took on the same student loan debt as he, she toiled and worked to develop her craft as hard as he. But she’s agreed to set that aside so that his voice can be heard first.

Do you trust that she’ll ever have the opportunity to stand in her own light? And what about us as a culture? What are we waiting for?

If you look at the walls of the Modern Art section of the Metropolitan Museum of Art, you’ll find 4% of the artists represented there are women. But 76% of the nudes are female.

Why must a woman be naked to get into a museum?