How do you prepare for the artist’s journey if you don’t know where you’re going? 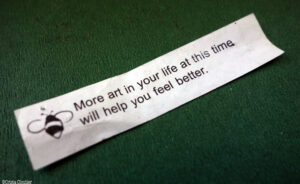 When I was selling other people’s art and not making my own art, I filled that empty space inside myself with stuff. Lots and lots of stuff. I had a big house, crammed up to the attic with collections, books, clothes… stuff.

Oh sure, it was beautiful stuff. And I loved my stuff. But my money, space and time was spent accumulating and supporting stuff.

And when you support other stuff, you aren’t supporting your stuff. Art.

Everything is energy. Energy is everything; intention, money and time included.

And remember that though money is a currency, it’s not the only currency.

Creativity is a currency even more valuable than money. Ideas are important, they have value. Look around, everything you see began as an idea. Not as money.

Artists strive for a wealth of ideas and abundance of creativity.

Relationships are another valuable form of currency, especially in this new economy. Spend your energy on building your audience, making connections, and giving of yourself generously.

Consider how you spend emotional energy too. Drama and shame will drain your creativity. Release them because they really don’t serve you. Endeavor instead to feed your creativity with beauty and ideas.

Independent filmmaker Alain Robbe-Grillet, who directed Last Year at Marienbad, spent decades making the films he wanted to make. When asked how he was able to make such artistic works in a commercial field, he said that he always kept his budget to a strict minimum.

He worked simply so that he could work.

I love that so much I’m going to say it again: work simply so you can simply work.

Your lifestyle is your choice. Your possessions don’t define you. More isn’t better.

My advice is to travel light on this artist’s journey, because the freedom it will afford you will be priceless.