Skip to content
His name was Henrik. He’d been an artist in Hungary until he faced the stark reality that there were no opportunities there. London has the biggest art market in Europe so, like many of us, Henrik went there. And this is where his journey begins, selling small paintings on a cold, gray London sidewalk. 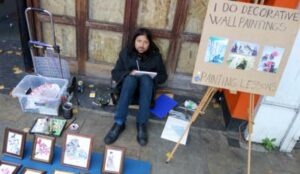 When he first moved, he slept on a couch in a friend’s squat that had neither heat nor water. He left his wife in Hungary but hopes to bring her to London soon. “I had to come here, I had to try,” Henrik explained. “Some times you just have to take the jump and follow your dream.”

His delicately beautiful paintings were priced at £10.

“Does this really work for you?” I asked, pointing to his makeshift gallery set-up.

“Some weeks I sell nothing, and I get scared and think it was all a mistake. But other weeks I get a commission to paint a mural and I sell some work and I might make £500. So I keep going.”

I spoke with Henrik about his plan. This wasn’t some lazy kid, trying to make a quick buck by avoiding work. Henrik was a thoughtful, accomplished, and dedicated artist with a burning ambition.

Recently he was offered an opportunity working for a large commercial firm. He could make art and be well compensated. Be able to afford a flat and bring his wife over. But he would have to paint subjects that he wasn’t interested in. He’d have to use a medium that held no charm for him, in a style that was totally unlike the one he’d spent years developing. “I have sacrificed so much,” Henrik told me.

Should he take this opportunity?

I know how Henrik eventually answered that question. But how would you? How much would you be willing to sacrifice for your work?