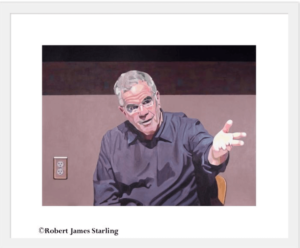 When I first seized upon the idea of teaching my bootcamp-for-artists online, I did my due diligence to see who my competition would be. Did other artist coaches even exist?

There was only one guy at the time, Paul Klein.

It made me really uncomfortable to learn that Paul Klein would be my competition. So I did what I advise you to do the next time you’re faced with competition that intimidates you … Open up to it. Completely.

I watched Paul’s stuff. Read everything I could find that he wrote.

And I loved it.

He had a wealth of experience and a down-to-earth way of sharing it. And more than that, I recognized the synergy between my message and his.

I loved what Paul was doing, and yet I knew that I was going to do it differently. I realized that Paul was not my competition.

Paul was my colleague.

When I launched The Working Artist Masterclass online, I reached out to Paul. I told him how his work as an artist’s coach had inspired me.

He responded generously by looking at my own work as an artist’s coach. I saved the email with his encouragement because I felt so proud of it. It was from Paul Klein! And now he was my colleague!

He earned a solid reputation in the art world as a champion of artists and a sage advisor.

A year ago, Paul sent me an email saying that he was in hospice and that these are his last days. He’s not going to be coaching artists anymore.

But the lesson that Paul Klein gave me is priceless.

Other artists are not your competition, they’re your colleagues.

Consider the artists of your community. Are you supporting them? Is there one artist who you could be reaching out to during this challenging time?

I invite you to check out this video of Paul speaking about success as an artist. You’ll understand why I was so proud to know this great man.