Rejection is an important part of being an artist – or any creative field actually. 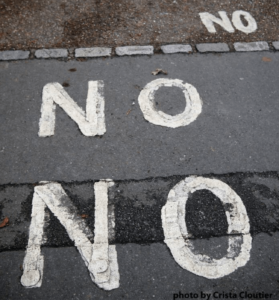 So it’s something that you need to learn how to handle with some resiliency.

As an artist and as a writer, I’ve suffered huge rejections. Instead of burying myself under a rock with a pint of ice cream and a raging case of shame, I’ve learned instead to use that same energy resiliently.

That doesn’t mean that I never feel disappointed. I do. But resiliency means that you don’t stop there.

It’s difficult but I want you to try to separate your ego from the rejection and ask yourself, what could I have done better? Differently?

For example, was your cover letter awkward? Were you showing your best work?  Were your materials professionally presented? And was it really a great match to begin with?

Take the time and effort that you’d normally put into beating yourself up and turn the experience into a positive by learning from it and continuing on.

Wasn’t it Einstein who said that insanity is doing the same thing over and over again while expecting different results?

Stop doing the same things over and over!

You try another, but this time using the insights you’ve learned from the rejection. You continue to repeat until a gallery says yes.

Divorce your ego and feelings of self worth from the outcome. Because that’s not what resiliency is about. It’s about you making the effort and putting yourself out there in better and better ways until you connect with the opportunity that’s right for you.

And that connection will come sooner if you can look objectively at where the weaknesses were and take the steps to improve.

So be brave. And be resilient.