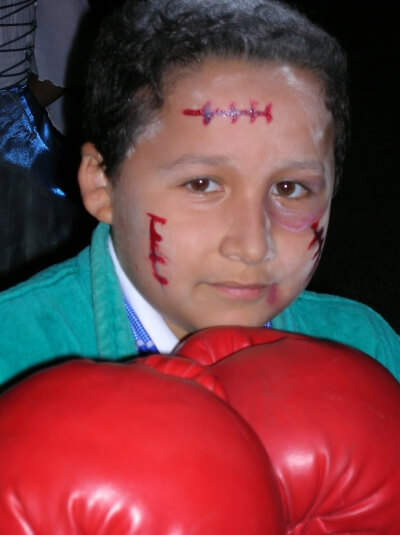 I imagine that you’ve heard of the boxer named Mohammad Ali. When he passed away a few months ago, the whole world mourned.

But Crista, you’re probably asking, what does a boxer have to do with art?

A lot, actually. Because there’s a lesson here that speaks to all of us who strive for greatness in what we do.

Mohammad Ali was gifted to be sure. But that doesn’t mean that his accomplishments came easily. He had to work very hard for everything he achieved.

We all do. It’s one of those inconvenient truths.

A lot of artists tell me that they “hate self-promotion.” And I get that. But you don’t have to point the spotlight at yourself.

Point the spotlight at your work instead. And use your growing audience to share your values.

When Cassius Clay was a young boxer, he won the Olympics for his country. Then, against all odds, he won the heavyweight title. He was handsome, charismatic, and very talented. A worldwide phenomena, Cassius Clay’s future was very bright.

But when he made the personal decision to convert to Islam, a religion that many Americans viewed with distrust, he alienated his audience. When he changed his name to Mohammed Ali to reflect this new spiritual path, he was openly mocked.

They fined him, sentenced him to prison. He was vilified in the press. He was stripped of his medals and achievements. He was banned from his sport.

The most popular man in the world had become the most hated.

For the next few years, Mohammad Ali was not allowed to fight. Many said that The Champ had blown it, had lost his chance. Had thrown away a huge career on what? His values.

For that, the critics sniffed, he had thrown away a great career? For that, he had missed his prime?

And it’s true, when he was finally allowed to return to the ring he was fighting boxers who were younger and stronger.

But he believed deep inside that he was still The Greatest.

And he fought to prove it.

Today, we don’t remember Ali as The Greatest because of his accomplishments in the ring. We call him The Greatest to honor his victory in the most momentous battle of his life: a fierce belief in self, and his willingness to sacrifice success for his principles.

Ever the champion, Mohammad Ali accepted his setbacks as challenges. Even when fate dealt him the bitter blow of Parkinson’s disease, stripping him of the gifts that we thought defined him, Ali kept fighting.

He kept showing us who he really was.

Professionally, Mohammad Ali was a boxer. But it turned out that boxing was just a vehicle that he used to inspire.

And isn’t the ability to inspire the highest aspiration of all artists?

So often, artists tell me that they’re afraid it’s too late for them. That they missed their prime.

As far as art goes, they couldn’t be more wrong. For it takes a mature vision and mastery of craft to be a great artist. It’s never too late.

Artists will tell me that they’re afraid of alienating their audience, of using their work to tell the truth. And yes, that can be the path to a quiet life, but it’s certainly not the path to greatness.

And then show the world your Greatness too.

Do you want to learn more? Join my mailing list and watch your in-box for helpful art tips and inspiring stories.