What’s an artist to do when confronted with the complexities of a creative life? 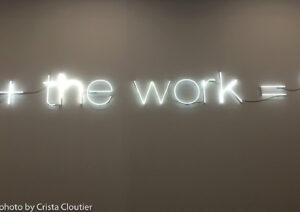 Work through the blocks between where you are now and where you want to be.

In his remarkable book The War of Art, Steven Pressfield talks a lot about art and resistance.

Resistance, he says, is that negative force that says no.

According to Pressfield, overcoming resistance is even more important than talent.

But how does one overcome resistance?

I only know one way and that is through WORK. (That’s why I call my program The WORKING Artist).

WORK is the only way.

Pressfield echoes this sentiment when he advises, “Put your ass where your heart wants to be.”

This is when we must seduce The Muse. We lure her with learning, reading, looking at art, and rambling on long walks. She loves this stuff.

But be careful, because many artists get stuck here.

I once had a photography teacher who felt he couldn’t create until he had the perfect darkroom. He spent ten years building it. He never made another picture of merit, but he had a nice darkroom.

As a writer, there are some days I can’t write. I don’t have the words. I’ll be honest, there are times when I just type the word F*CK over and over again, because I don’t know what else to write. I feel frustrated and angry.

But I still sit at my laptop each day. I show up and use that time. Because I know that routinely showing up and doing the work is how we overcome these challenges and achieve our goals.

In fact, the true secret to achieving your goals is routine.

A routine, also known as your art practice, helps you to overcome procrastination. It moves you past your fears. You have fewer decisions to make about your time so that when The Muse returns, you can focus on your work.

Picasso spoke about this when he remarked that, “Inspiration exists. But it likes to find you working.”

Steven Pressfield takes this concept further, citing that this alone is what separates amateurs from pros.

Working professionally as an artist isn’t about money. It’s not about acclaim nor recognition. It’s not even about outside validation.

Amateurs have amateur habits. They get stuck when adversity and problems appear.

Professionals have professional habits. They overcome resistance and create a consistent practice so they can work through the challenges.

So don’t get stuck.