Mickey was born the moment that his father died. His dad was rushing to the hospital to greet his firstborn son when he was hit by a train and killed instantly. 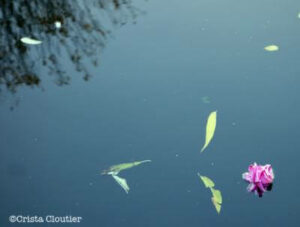 A few years later, Mickey’s misfortune continued when his mom married a Bad Man. Family lore has it that the Bad Man beat little Mickey so brutally that all the sense was knocked out of him. Mickey would always remain a boy, even after he was grown.

He was my father’s cousin. This boy/man lived with his invalid mother in the forest near my grandparent’s Minnesota lake house. An idiot, they called him, but not unkindly. To me he was a cross between a giant and Snow White’s sweet dwarf, Bashful.

Each summer Mickey would teach me the trails of the forest, pointing out the birds, trees and wild animals he called his friends. He taught me how to put a squiggly worm on a hook and to cast a fishing rod. He never spoke to me, only gestured and smiled, both of us equally shy of one another.

One summer, Mickey shared a secret. We followed the trail that led from my grandparent’s dock toward his mother’s house. In a clearing, I saw a small sign with the word “Mickeyville” scrawled upon it. A pretty little town lovingly built of wood in miniature. Mickey, it would seem, was a deeply talented woodworker. His eyes shined with pride as I walked through Mickeyville. It was all there, brightly painted houses, a school, a tidy church with its tall steeple. And there was the hospital, right next to the railroad tracks. Just as in Mickey’s life, there were no people in Mickeyville.

I wouldn’t return to the lake house for another 20 years. They were all gone by then: my beloved grandparents, Mickey and his invalid mother. I picked up a rusty fishing pole from the edge of the dock and cast the empty hook into the water just to remember how it felt. There was a hard tug and I reeled in a huge Northern pike – off the dock with an empty hook! The ghosts of my people were having their way with me.

Leaving the spirits of the water, my eye caught the trail into the forest. Soon I found myself standing in the ruins of Mickeyville. Countless winters had battered the buildings, most crushed by the weight of snow and neglect. The tall steeple of the church stood alone. I reached through its wide front doors, past the rows of tiny pews, across the altar and removed the small wooden crucifix fastened to the back wall.

Today, the crucifix from the Mickeyville Church sits on my own altar where it remains my favorite piece of art.