I like a hero as much as the next girl, maybe more. Probably more. But my heroes aren’t action stars, 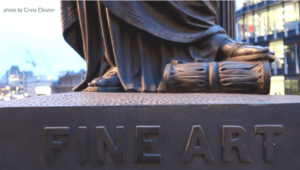 sports legends, nor Kardashians. They’re not even all artists.

My heroes tend to be the special teachers I’ve had over the years.

A few of them worked in a classroom, most of them didn’t. But they each showed me new ways of looking, seeing, working, and being. And that’s why those special teachers are my greatest heroes.

My British friend doesn’t talk of heroes. They frown on that kind of exuberant language in England. Instead, the Brits nod approvingly and say things like “jolly good.”

But over the years, my friend has spoken softly of his college art professor in tones that suggest great fondness and admiration.

It was many, many years ago now. Arthur Bell Foster was already an old man. He was a landscape painter whose medium was watercolor and whose subject was the breathtaking, yet sometimes monotone, grandeur of Engand’s Lake District.

My friend always smiles when he remembers Mr. Foster’s hand-tied bow ties, brown tweed jacket, mustard colored waistcoat with a discreet crimson check, his old-fashioned exactness, and his habit of referring to everyone as “Old Chap.”

He remembers that each day Mr. Foster was asked what he’d like for lunch. And each day Mr. Foster thought hard about the question, as if he was hearing it for the first time. And then he’s always order the same: “A tongue and mustard sandwich and perhaps a cheese and pickle one as well, if you don’t mind.”

My friend remembers how the new art teachers, with their long hair and radical ideas sniffed in disdain at Mr. Foster’s outmoded work. It was the era of the “Pop Art” mobile and daubs of abstract color, which in the hands of anyone a few leagues below Rothko, bore an uncanny resemblance to the color charts released by manufacturers of mass-produced household paint.

He remembers how Mr. Foster would be pushed out of education, replaced by these young men who were more interested in chasing their own careers than in teaching their students.

But mostly my friend remembers the lessons, the attention, and the care Mr. Foster put into the craft of painting.

It took me a long time to find a painting by Arthur Bell Foster. History has long forgotten him and his work. One might wonder if his whole career was in vain?

But though it’s been decades since he’s seen it, and the gift was a surprise, my friend recognized his Teacher’s work the moment he unwrapped that package.

He showed me where Mr. Foster had used wax with his watercolor to give it texture. He showed me how he used color, his brushstrokes. He remembered the lessons he’d learned that had become a part of who he is now and the work he continues to do.

Arthur Bell Foster had been more than a teacher. He’d been The Teacher.

And to me, that’s heroic.