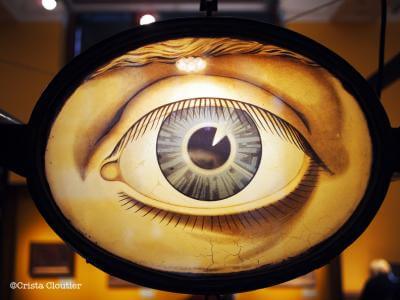 I was 17 years old and had never met a blind man before. Every day, he sat at the counter of the diner where I poured coffee.

The first time we met, he pulled out paper and colored pencils and started to draw. “But you can’t see!” I blurted out.

Blinded by disease when he was 8 years old, he said that he’d always been an artist. He didn’t stop just because he had lost his sight.

I’d watch him draw for hours, his face strained inches above the paper. He could still see colors and light. He drew with an 8 year old’s perspective, with the ground hugging the bottom of the page, but his skies, his skies were glorious fields of color.

He signed each finished work carefully, slowly writing out the letters of his name, “Andrew David Smith.”

I had never met an artist before, and was nervous when I asked him how much it would cost to buy one of his pieces? “I don’t make these to sell,” he smiled. Then he handed me the drawing he had just finished. I framed it proudly, the first piece in my collection. I have it still.

It wasn’t about the art for him, he said. It was about being who he was, and not letting anything take that away.

One day he came into the diner with another man. They sat in a faraway booth but the fragments I caught of their conversation captivated me. They were speaking of things I felt in my soul, things I’ve never been able to find words for. I kept their coffee cups full as I strained to listen.

When they started to leave, I grabbed Andy’s arm, “Please,” I whispered, “Tell me what you were saying to that man?” And this was how I found my first teacher.

We met every Tuesday night. He patiently answered all of my questions, the ones I’d pent up for years. “Truth is everywhere,” he taught me. “Open yourself up to everything, always seek beauty.” He described the universe as a magnificent vase that had smashed into tiny pieces. “And each of us clings to our small shard of glass and calls it a vase.”

The way that he moved through the world was magical. When he decided to spend the summer in the mountains, he told me he wanted to buy a van. “But you’re blind,” I reminded him, “You can’t drive.”

A few weeks later he won $10,000 in the lottery and bought that van. Then a friend mentioned he was looking for a ride to the mountains, and offered to drive them both there. That’s how Andy rolled.

He knew things about people that couldn’t be seen. The energy that came from his hands was so strong that he could light candles without a match. And when he smiled, joy spilled from his face.

I would have many teachers over the years, and I would know thousands of artists. But when I think back on my friendship with Andrew David Smith, I am so grateful that the first artist I ever met was a blind man.

Because the greatest lesson he taught me was that you don’t need eyes to see.