I travelled the world, only to find myself back where I began 7 years ago. 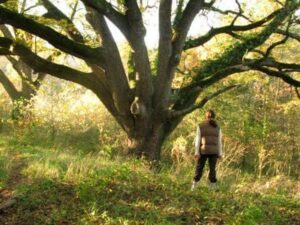 It’s been 7 years since that day someone made the offhand remark, “Don’t you wish you could sell it all and move to the south of France?”

My ears perked up. I love the south of France! But half an hour later found me thinking that was a stupid idea. It would never happen.

I started thumbing through American Art Collector magazine as I remembered an American artist I had once met in the south of France. He lived in a village I had visited. Lucky guy. How was he able to do it?

I turned the page of the magazine. I may not remember names but I always remember images. Right there, right in front of me, was an article about his work. The artist’s name was Dan Adel.

So I quit my job, sold up my stuff and off I went. Once in France, Dan Adel and his gorgeous wife Veronique became my friends. And I became lucky too.

It’s been 7 years since that small French village first took me in, teaching me to find strength in solitude.

I have a thing about 7 years. I believe that it constitutes a cycle. The fact that I am about to launch The Working Artist, a work that is very much the culmination of the lessons I’ve learned these past 7 years, made this summer’s visit to France even more significant.

I’ve come full circle back to this place, this place that always holds the answers to my questions. What will it teach me this time, I wondered?

As I walked through the countryside and into the village, I passed a café and someone called my name, “Crista!”

It was Dan Adel. Wouldn’t you know it?

Dan was having lunch with a shaman who happened to be passing through. The shaman listened as Dan and I caught up on one another’s lives. He nodded quietly as Dan and I went into one of our long, long conversations about art. The afternoon sun moved across the sky and settled into dusk.

I love those kinds of exchanges: art, philosophy, spirit, and meaning. Sometimes I think I was drawn to the arts just because of the conversations.

As I stood up to say my good-byes after that very pleasant and unexpected afternoon, the shaman grabbed my arm and whispered, “You’ve learned how to be strong. Now it’s time to open yourself to the world, be receptive, vulnerable. Even when it hurts. If you look for it, the universe always gives you what you need.”

I nodded, a little unsure what he meant.

A few days later found me back in England, I was walking in the countryside with Companion when I not-very gracefully fell into a large bush of nettles.

I screamed in agony, my arm covered in stinging red welts. Companion pulled the leaves of a nearby weed and began rubbing them to make a paste, which he applied to my burns. The pain floated away.

He explained, “The dock leaf takes away the nettle’s sting. It’s easy to find because dock plants grow right next to nettle. Nature puts the remedy next to the injury. If we look for it, the world always gives us what we need.”

And suddenly, I understood.