Picture this: trying to start an artistic life with a new spouse, while living inside a tiny 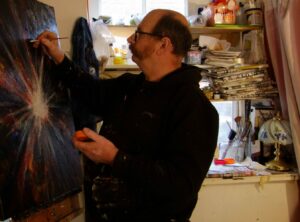 caravan. Regardless of the obstacles, things start taking off. You even secure an art agent. But the agent steals all of your work, your personal belongings and the caravan.

Now, imagine being rendered completely homeless, with no money and nothing more than the clothes on your back. Suddenly, your spouse is rushed to the hospital. There’s only 48 hours to reverse the condition, or your partner will perish.

Can you picture it?

This is the extraordinary story of UK artist Mark Hilsden.

In his youth, Mark allowed family and friends to destroy his dreams of becoming an artist. He eventually left his hometown behind for London’s big city hustle where he became a bus driver.

But his London life just didn’t feel like enough. “I was bored and felt as if I was missing something crucial in my life,” Mark lamented.

He decided to leave London and relocate to Lancaster. There, Mark challenged himself to draw at least one picture each day. “After about a year, I was getting pretty good and people started asking me to make drawings of their homes,” he explained.

Mark soon found himself with a house-portrait business, walking door-to-door with a sales letter and portfolio in hand. He purchased an old car with his commission money so that he could reach more potential clients.

Little did anyone know that Mark lived in that car. Or, that his masterpieces were drawn entirely while sitting for hours in a local McDonald’s!

The commissions started pouring in. But one night, he was especially tired while driving. Mark totaled his car in an accident. Now he found himself with nowhere to live.

But Mark was able to get his life back on track. He found a place to live, resumed work as a bus driver and met the woman who would become his wife. Mark remembers, “I met my wife and got married but I struggled to get commissions and wondered what I needed to do to become a proper artist?”

He and his wife brainstormed on ways to solve this dilemma. They decided to buy a caravan to live in so they could focus their resources on his art career. Within a few years, they launched a major exhibition of Mark’s work and the sales and commissions began rolling in again.

To sustain their success, Mark and his wife decided to hire an artist agent. But they came home one night to find that their caravan was gone. The agent had stolen their home, the art and all of their worldly possessions.

The situation took its toll on his wife’s health. She awoke one morning in pain. Mark rushed her to the hospital. She was diagnosed with blood poisoning and the situation was dire. If the doctors couldn’t reverse her condition, she could die within 48 hours.

When Mark looks back on those terrifying moments, he says, “I was desperate. I had little money, I was homeless and I didn’t know if my wife was going to live. That’s when I found Crista Cloutier. I tried a free marketing course she offered as a teaser for The Working Artist Masterclass. At long last, I felt as if I’d found useful information and somebody who understood artists.”

Crista asked Mark why he didn’t sign up for The Working Artist course? After emailing his unusual situation to Crista, Mark returned to the hospital where the doctors informed him that his wife’s survival was very uncertain.

That night, Mark nearly took his life. He broke down in a cathedral where a bishop prayed with him to push through. The next day, another visit to the hospital revealed that his wife would live!

Elated and relieved, Mark checked his emails. Crista had sent word: “Mark, just do the course and we’ll work out how to pay later.”

Mark managed to successfully complete The Working Artist Masterclass and began putting his life back together.

He and his wife moved to the Lake District, a small rural area outside of London. They began using the lessons he’d learned from The Working Artist. When local galleries showed no interest in Mark’s art, he began looking for other ways to get his work seen.

The couple noticed that many of the town’s shops were empty. Mark asked about the properties and was offered a vacant shop. He transformed it into a gallery to exhibit his paintings and pen and ink house portraits.

“For two months we had loads of visitors but nobody gave us money,” he said. “One evening I was just about to shut the gallery when I noticed a lady with her nose to the window and invited her in. She bought our first picture.” Soon, more commissions rolled in.

Today, Mark & his wife’s gallery is a bustling community arts hub. In addition to showing Mark’s work, a regional artist is featured every six weeks. The gallery also sells art supplies and offers classes and workshops. Mark tells us that they’re even developing art holidays with local hotels.

Mark explains, “Our driving force is to help local artists develop and build stronger practices so they don’t have to survive on day jobs. I want to see the Lake District where we live become a region of artistic excellence. The principles we’ve learnt from The Working Artist play a key part in this.”

At the root of it all, Mark wishes, “I hope by sharing my story that I can give others hope and courage to put their dreams into action.”

If you want to be supported as you grow your own art business, sign up for FREE information.

Working in the international world of contemporary art, Crista Cloutier has spent her career selling art and marketing art to art galleries, museums and private collections.

Using her professional experiences, Crista has created The Working Artist Masterclass, where she’s developed a global reputation as an artist’s coach. Crista can teach you how to be an artist; including how to sell your art, how to sell art online, how to sell photographs, how to price your art, how to succeed at art fairs, and even how to find your art style.