Every artist’s journey tells a story. And every story has an antagonist. 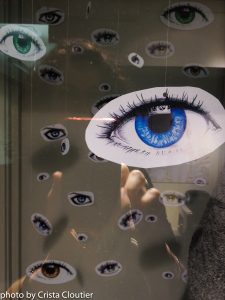 The story of your artist’s journey is no different.

The antagonist is the adversary, the opponent. It’s what comes between the hero and her desire.

Consider your own journey, where you are right now.

Can you identify an antagonist in your story? Yes, it could be a person but more frequently it’s a habit or belief.

What’s the antagonist in your story?

I believe that if you look the antagonist in the eye, you’ll see what it really is. It’s the monster, born of fear, named NOT ENOUGH.

Not perfect enough. Not strong enough. Something’s wrong with me, I’m not good enough.

But in any story, it’s the antagonist who leads the hero to truth, to transformation. Even though it’s a monster, it’s an important character in determining how to story ends.

Because you’ll find the monster named NOT ENOUGH at every turn of the artist’s journey.

Don’t resist nor retreat when you see it.

The best way to claim victory over the monster is to question it.

That’s right, each time you find yourself doing battle with NOT ENOUGH, let the sharp sword of your questions cut deep to the truth.

The truth is that you ARE ENOUGH.

Armed with this knowledge, you’ll step out of the monster’s shadow and into your own light. You’ll become the hero of your own story.

I wish you many happily-ever-afters!

Learn how to approach to art-world decision makers, create revenue streams, and get paid more being who you are – an artist.  Join my list, it’s FREE, and I’ll share everything I know about working as an artist.