I told Andy about the special place where I ride my bicycle each day. It’s a tiny island in 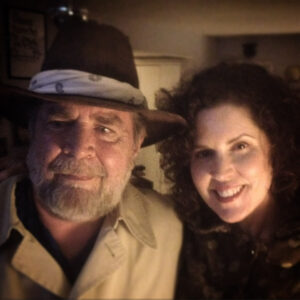 the middle of a pond. I explained how it’s been my destination for years; it’s where I write, where I work and where I dream.

“Where is this place?” he asked.

When I explained the location, he replied, “Oh, you mean Andy’s Island!”

Andy said that when he was in high school, the pond was being built and water was being piped in slowly. Because of the construction, big stones and boulders lay everywhere.

Each day after school, Andy would move a few boulders and place them across the pipe where water was trickling in.

He said it took years for the soil to collect and build. First there was just a tiny spot of land, and then one day a palm tree appeared on it.

It’s funny that I had been unknowingly drawn to Andy’s Island for years.

I first met Andy when I was 17 years old. He walked into the coffee shop where I worked and smiled as he said, “Hello friend!”

Andy was an artist. In fact, he was the first artist I ever met.

But Andy was also blind. He had developed a unique drawing style that used the tiny bit of strength his eyes had left.

Andy had lost his sight during a battle with brain cancer when he was just eight years old.

”How can you be an artist when you can’t see?” I had asked him.

Andy explained that he’d always been an artist. He wasn’t going to let anything take that away, not even blindness.

As a young man, Andy had brought his portfolio to a fancy art gallery. The gallerist, Andy told me with tears in his eyes, had looked at the work and then laughed.

The gallerist had laughed in his face.

But just because he couldn’t see didn’t mean that Andy was blind. He left that art gallery feeling shamed and small.

But it was the gallerist who was blind. He couldn’t see that Andy’s work came from someplace special and deep in his heart. And it was beautiful.

Andy’s work didn’t fit on the walls of fancy galleries, but who cares? Andy’s art is a lovely vestige from a man who sees the whole world as his friend.

I looked for Andy recently. It took a while to discover that he could not be found.

“He was at peace,” I was told about his death.

As I sit at Andy’s Island writing these words to you, I can see that even though he lost his sight when he was eight years old, Andy always had a vision. As an artist and a spiritual seeker, he had followed that vision.

And just as the boulders he lay down each day in high school would eventually became a flourishing island, the seeds of wisdom and love and beauty that Andy spread during his life had blossomed as well.

“It’s not goodbye,” I hear Andy whisper. “You can always find me here.”

I am so grateful that the first artist I ever met was blind, because Andrew David Smith taught me how to see without my eyes.

Never stop looking. Never stop being the artist that you are. Let this be Andy’s legacy to us.