My friend Mark shined the light of his creativity on all he did. 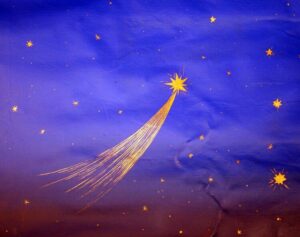 We met years ago in art history class, where we fell in love. Not with each other, mind you, but with Vincent Van Gogh’s painting The Starry Night.

Mark wasn’t the kind of guy one usually meets in art history class but he’d been inspired to study art after hearing the song “Vincent.” He’d often sing it as he played his guitar.

Mark was different from the other students. He was outdoorsy, raucous, funny. And he loved garbage. Eventually, Mark started a successful demolition business. He laughingly referred to himself as “The Junkman.”

He became an artist himself, using as his medium those things that other people discarded. His business gave him not only the best materials but he made enough money to focus on his creative work. “Art from junk,” he’d call it.

We became art buddies, geeking out over what we’d seen or stuff we’d make. Sometimes he’d play his guitar, making up funny songs to make me laugh.

I kissed him once. It was at one of his infamous parties. He’d talked me into a ladies arm-wrestling contest and cheered me on as I won a bottle of tequila.

Then we climbed up a tree where I nursed my sore arm as we took swigs from the bottle. Even though we were buddies, I kissed him because Mark was the coolest guy I knew. And I’m pretty sure that if you’d been sitting in that tree, you’d have kissed him too.

But Mark, who loved life so much, would one day end his own.

Like so many artists, Mark fell victim to the ravages of depression.

I don’t know what treatments he sought, but I do know this; artists, by definition, are treading in deeper emotional waters than most. The numbers don’t lie, we have a long history of substance abuse and psychological issues.

Therefore, it’s imperative that you guard your mental health and emotional state, that you look after yourself both physically and psychologically. The dangers are real.

We all have wounds. The point of those wounds is to heal them.

At those times when it seems there is no light, when darkness swirls like Van Gogh’s night sky, take your pain seriously. Reach out for help. Eat well, rest, do those things that heal, and shun those habits that hurt.

When I close my eyes, I can still hear Mark strumming his guitar as he sang, “And when no hope was left in sight, on that starry starry night, you took your life as lovers often do. But I could have told you Vincent, this world was never meant for one as beautiful as you.”