Her name was Ruffian. And she was the fastest girl alive. They said she couldn’t beat the boys but I didn’t believe them. 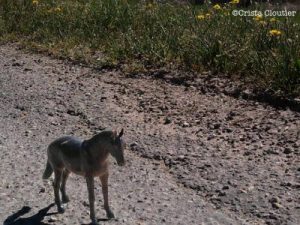 Ruffian was a two-year-old thoroughbred racehorse who ran undefeated. In fact, no horse had ever run in front of her, she took the lead every time and refused to surrender it.

But no matter how many records Ruffian broke, they still said girls can’t run faster than boys. So they set a match race between Ruffian and the winner of the Kentucky Derby, Foolish Pleasure. It would be the race of the century.

As a young girl I was totally obsessed with horse-racing, in my imagination it held the magic of both beauty and adventure. Where other adolescents papered their walls with rock stars, mine were covered with jockeys. Where other kids went to concerts, I went to the track.

My parents looked at me aghast as I rattled off thoroughbred bloodlines (I memorized them), pored over the racing results in each day’s newspaper, and saved my allowance for the Trifecta. In ill-founded efforts to stunt my own growth, I carried a brick on my head and took up smoking.

Ruffian was my heroine, and I’d followed her career since her first race. Finally, a girl horse who could beat the boys. And anyone who didn’t believe it was foolish indeed.

They’re off! I’d waited all summer for the match race and was glued to the television. Ruffian once again refused to give up the lead. I jumped up and down shouting her name.

But at the final stretch, the unthinkable happened. Ruffian’s leg snapped.

I screamed when that big beautiful filly broke. But even then she kept running, even after her leg was thrashing wildly, her jockey was not able to control her. Ruffian wanted to win.

“Stop her!” I cried to the TV as she struggled on, but they couldn’t.

When Ruffian awoke from surgery, no one told her that the race was over. Though the terrified vets tried to restrain her, she flailed about until she smashed her whole body to pieces. She just kept running. There was no choice but to put her down.

I never did become a jockey, height and a sweet-tooth saw to that. But a part of me broke that day too. And I still weep whenever I hear Ruffian’s name. In fact, I’m crying now.