Has anyone ever told you that your creative work sucks? 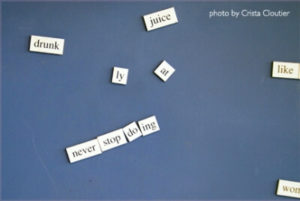 If not, just wait. It’ll happen. And when it does, avoid the urge to hide in a hole. Instead, consider it a rite of passage…

I’ve been told several times over my career that I’m not a good writer. And my photographs have been dismissed as well. Like most artists, I internalized those hurtful comments and even believed them.

But I never let them stop me.

Well, for awhile I did give up my dreams and got a “real” job selling other people’s art. But I pulled late nights and early mornings to write the scripts, essays, and books that haunted my spirit and demanded to be given voice.

I never stopped writing or taking pictures. I just couldn’t.

It took a long time to realize that “they,” my critics, were simply wrong. Everyone brings their own experiences, aesthetics, and stories with them when they look at art. Just because someone doesn’t like something, doesn’t mean it’s “bad.”

But more importantly, no one is born a brilliant artist. It takes time and dedication to a consistent practice to get to the good stuff, to develop your craft and find your voice.

A few years ago I was at a dinner party with the gorgeous artist Kiki Smith. Kiki’s had massive success in her career, the kind most of us only dream about. We were talking about our journeys as artists.

A curator quipped in, “I studied fine art in college, but I realized I wasn’t a good enough painter to make it. So I became a curator instead.”

It’s that simple. It’s not about whether you’re good or bad, it’s not about how much money you can earn. It’s about owning who you are, giving voice to your ideas, doing the work, and not letting anyone stand in your way.