How To Sell Your Art 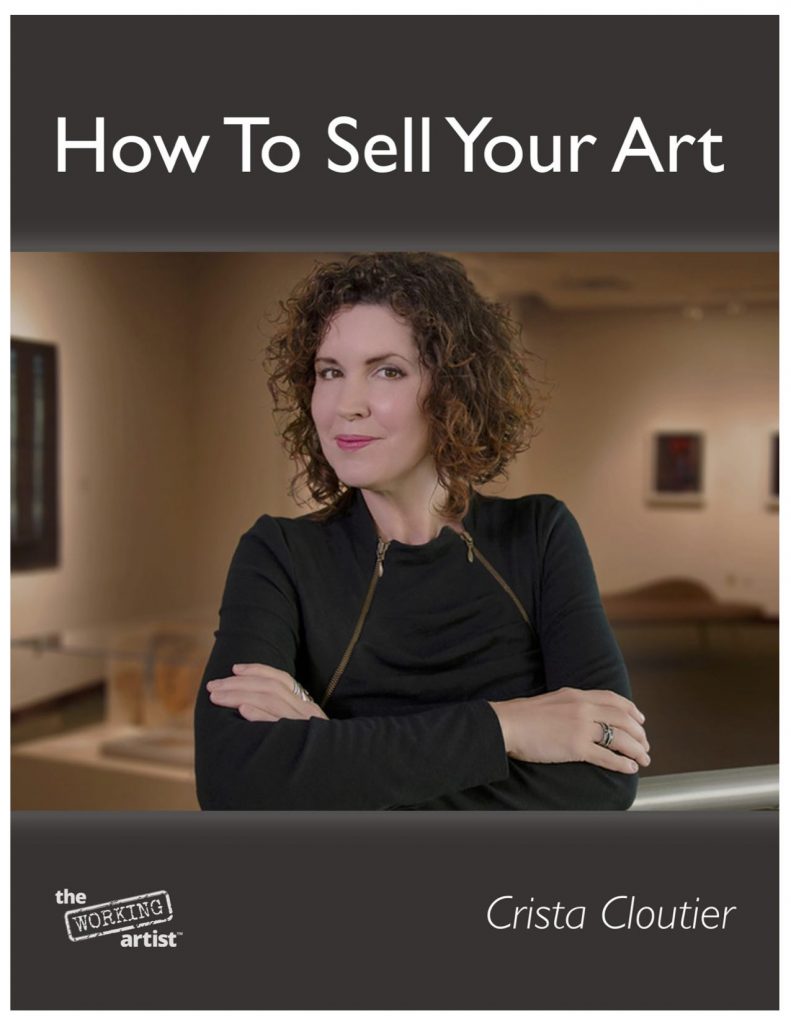 Many artists sell art out of their studio, online, at co-operative galleries, or even at one of the thousands of art fairs that are so popular.

But just because you’re an artist, doesn’t mean that you know how to sell your work. In fact most artists really struggle with sales and marketing and face consistent disappointment.

When I meet artists, one of the first questions I ask is “How do you sell your art?”

I am often surprised by the ingenuity of the answers. But the truth is, the most common response is a sad face followed by the response, “I don’t sell my art.”

This is a problem.

I am going to break down the question of how to sell your art by using the 5 W’s – you’ll remember these basic rules for sharing information from grade school: Who, What, Where, When, Why and How.

Who should you sell your art to? Most artists don’t give this question nearly as much consideration as they should, which is a shame because the answer to this question is key to success.

Who is your ideal audience? If your answer is “everybody,” then I urge you to try again, to go deeper. Have you had sales in the past? Take a long look at who has bought your work, what are their common denominators?

Does your work appeal to a group of people with a common interest, like those concerned with environmental issues, for example, or spiritual imagery, or cats, or whatever your subject matter is? What is your ideal client interested in and how can you use your work to intersect with them?

Are they seasoned art buyers, serious collectors focusing on those with a proven museum exhibition record? Or do they buy impulsively, much more drawn to pictures that speak to them on an emotional level? Each of these buyers will be found at very different venues.

Maybe your ideal customer isn’t a private collector at all? Perhaps your work is better suited for public art projects? Or corporate collections? Or maybe your work is very graphic and can capture the elusive online buyers? Try drawing a fully fleshed outline of one or two of your ideal clients. Who are they? What do they do? How much do they earn? Where do they work? Spend their spare-time? What do they read and watch? Imagine their decision-making process when they actually do buy a piece of art.

If you are asked to participate in an art fair or to join a gallery’s stable, take a moment before you agree. Ask yourself – Is this really a good opportunity for you? Will your ideal client be there? If not, you could be wasting your time and money.

Don’t say yes to things you are invited to participate in, no matter how prestigious, unless it makes sense for your work and your ideal client.
By targeting exactly who your ideal client is, you will be able to hone your art marketing specifically for them.

Too many artists think you can sell your art by casting the net wide and seeing what it catches. This is a tremendous waste of time and energy and often leads to disillusionment with the art world.

What is that you make?

Can you speak about your work? Is your artist’s statement compelling and readable? Or does it read like it was written by someone who hates writing artist’s statements – brief and confusing with excessive homage to your feelings?

Or worse, is it shrouded in art-speak? Thick academic words with the term “post -” repeated several times before the word “modern?”

A strong artist’s statement, whether it’s written on a wall label or simply the way you talk about your work, is the best way I know how to sell your art.

Be ready to talk about your work, and share your passion for it when you do. Tell a story, take them on a journey. You don’t have to explain every brush-stroke; you just have to help viewers find their way into the work.

Understand that not everyone can be inside your head. And more often than you would imagine, people are intimidated by art, they fear looking stupid and won’t dare ask questions. Educating people about your work, making them feel comfortable to engage in a conversation with you, will go a long way toward building a clientele. Just don’t over do it; there is a fine line between being an entertaining artist and being a flat out bore. Do not cross this line.

And you don’t have to speak purely about the work, tell your story as well. Let people know where the work is coming from and how you make it. Let them in on where you want to go next. But again, don’t over-share. Keep it brief but compelling.

Leave room for them to ask questions. You want to engage them, not deliver a monologue.

Nearly every artist I work with tells me that she wants to be included in major museum collections. Or that he thinks his work would do well in a blue-chip New York gallery. Maybe. But then again, maybe not.

I am not saying this isn’t possible – au contraire! But it is important to understand that that it often takes years of very hard work to achieve these goals, and more importantly, that these goals may not necessarily be right for you.

Museums have a very specific agenda, as do the name-brand galleries. Is your work ready? Is it speaking to the same audience as the institutions you are chasing? Is this really the best career path for you?

A lot of artists have been struggling for so long, have bucked so many odds, worked to overcome the nay-sayers, that they feel they have something to prove. I won’t succeed until my work has the stamp of approval of a name brand – it’s got to be represented by the best gallery in town, I’ve got to have a retrospective at a major museum. Only then will I have succeeded.
This is not the best way to chart your course. Forget about proving anything to anybody. By being an artist who makes the work, you are living the most authentic version of yourself. That is all you need to prove.

I bring you back to your target audience. Are the galleries you are lusting after really showing work like yours? Is their clientele really right for you? Or are you seeking outside validation?
There is nothing wrong with getting your work into good galleries. Conversely, there is nothing wrong with skipping galleries altogether and finding other ways to sell your art. Be creative!

My friend James Clarke was an aspiring photographer. When he was let go as the photographic editor of a national newspaper, he finally got his big chance to strike out on his own. He was going to make a living from selling his art, photography.

But this was just as the recession hit. Galleries wouldn’t even look at his portfolio because they were too busy closing their doors. There were no freelance jobs available. The landscape of possibilities looked bleak.

So James thought outside the box.

James has diabetes. He contacted Diabetes UK, the British foundation, and offered to create a series of portraits of others with diabetes, putting forward a healthy and vibrant face on the disease. The organization was thrilled with the idea and gave him the commission.

That body of work has now toured England as a large exhibition, has been turned into a book, and received a ton of press. This opened up all kinds of other doors for James as well and he is now a working artist.

Where will your work find its audience?

Always be ready to sell your art. Have a business card on you at all times, make sure your website address is on it. (Yes, you need a website.)

Have your work documented with all of your professional materials ready to go at a moment’s notice. Opportunity does not wait for you to get your act together.
As a professional artist, you never know when you might meet someone who could open a door for you. Prepare for your success.

Because when could be now.

Believe it or not, the why is the most important question.

This goes back to your artist’s statement and being able to talk about your work. When you answer the question why, you engage your audience by telling a story.
Why do you make the work that you do? Why are you an artist? If you couldn’t make art, what else would you do? Why should we care? Try to go deeper than “My work is an expression of my feelings.”

Why are you an artist?

I believe that making art is more than what you do, it is a part of who you are. So what does it say about you?

What makes your work different? Out of all the millions of artists out there, why should we look at your work? Why should we buy it?

Really think about the answers to these questions, write your answers down and use your responses to craft your statement, prepare for portfolio presentations, and develop your marketing materials.

The art world is small and it is a business. You build a reputation by behaving like a professional.

Have your materials polished and edited, create a marketing plan and stick to it, follow submission guidelines to the letter, support the communities and organizations you want support from, be generous to other artists, keep your ego in check, and demand technical excellence from all that you do.

It is important that you continue your education throughout your career. Not only to expand your artistic skills, but also for professional development.

It is always a good idea to review your marketing materials with fresh eyes, to learn the most recent changes in social media, the marketplace, and to challenge yourself to set career goals and learn new ways of attaining them.

There are hundreds of Professional Practices programs out there. My own program, The Working Artist, is an online course that teaches artists like you how to professionally package, market and sell your art in a way that feels authentic and not slimy.

And my colleagues number in the hundreds, so you have a huge choice of Professional Practice workshops. The challenge lies in finding a teacher who speaks to your interests, to your work, and who presents the information in a way that you can relate to and understand. Do your research, sign up for a few mailing lists, listen to what each teacher has to say and who speaks to you.

By thinking through the 5W’s (and an H!), by being true to yourself and investing the time in marketing your work, you will draw buyers to you, increase your reputation, and create the career of your dreams.

And that’s how you sell your art.